Greetings from the President

"Now is the time to solve social problems through recycling!
More than 60 years have passed since Yamaichi Metals was founded, and the world has changed drastically. I am reminded of the words of our founder's predecessor, who said that it takes wisdom to keep up with the times.

In the Showa era, especially during the first 35 years of rapid economic growth, mass production of goods was necessary because consumption continued to increase while the economy was becoming more affluent. On the other hand, recycling at that time only had the value of lowering costs.

Today, Japanese society has become so affluent that there is hardly a household without electricity, water, or a refrigerator. At the same time, there is an overabundance of goods that have been produced, so recycling is becoming more valuable than ever before as a way to reduce the burden on the global environment.

Recycling is a very good way to solve environmental problems. I believe that we can ease the burden on the environment by continuing our recycling method, but I would like to see us face the environmental and social problems and keep challenging ourselves to find a better way of recycling that can contribute to solving them. I will do my best to ensure that the earth remains in a healthy state for our children and grandchildren's generation.

Through the effective utilization of resources, we strive for harmony with the environment.

I believe that a company is a living thing. Because of this, environmental problems are important issues that we cannot ignore. It is therefore our mission to protect the earth, animals, nature, fossil fuels, forests, etc., and we must take action to avoid wasting limited metal resources, etc. Japan is an industrialized country that is practically devoid of resources, and nothing would make me happier than to be able to prevent our country from getting any poorer and pass a better Japan on to the next generation.

We strive to contribute to and coexist with society and local communities.

The self-supporting efforts of individual companies won’t be enough to achieve a sustainable society in the 21st century. Through our aluminum recycling business, we have constantly emphasized the importance of achieving mutual growth with our customers. We also strive to build good relationships with municipalities, companies, and other stakeholders in fields that include environmental planning in order to work on creating systems that will help us build a sustainable society.

We contribute to Japan’s industrial development to help connect us to the next generation.

In a field where resource recovery was once said to be impossible, we pursued extensive surveys, research, and development to hone our technical capabilities. Our technological development was ignored at first, but we gradually made improvements and eventually achieved aluminum resource recovery that would be useful to anyone. We will continue striving to contribute to Japan’s industrial development in the pursuit of technological innovations that lead to the next generation. 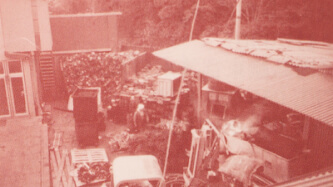 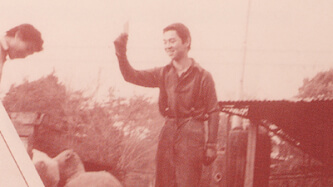 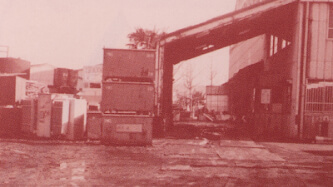 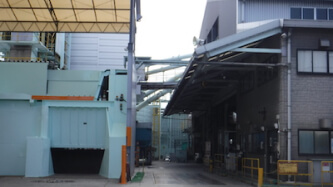 Ltd. was established in April 1961, and the year 2021 marks the 60th anniversary of its founding. To mark the 60th anniversary of the company's establishment, we have revamped our symbol mark and logotype as a fresh start with renewed determination. The design was created by Riko Takahashi, an artist active both in Japan and overseas. With this new symbol mark as a symbol of our unshakable faith, we will continue to take on various challenges with even stronger determination and ambition to contribute widely from the local community to the global environment based on our corporate philosophy of "co-existence and co-prosperity.

The Edo period (1603-1868) was a recycling-oriented society where people lived without wasting limited resources. This is the spirit of "mottainai" that we may still have today. The beauty that is created from the minimum necessary elements that have been cut down.

The crest is made up of "Yamaichi" and "En" in the image of a family crest that simply expresses the spirituality unique to Japan. The top of the aluminum can, which is also called Suehiro, has a spreading form like a fan, which is considered to be an auspicious item that signifies prosperity. It looks as if it is stretching upward.

The arrow on the right represents "the path Yamaichi should take," and the arrow on the left represents "ascent. The circle of arrows, which is a circle of arrows, represents "circulation" and "eternity," and the entire logo serves as a "recycling mark. The tip of this arrow also looks like the start or stop of a calligraphy, and I incorporated that element into both the Japanese and English logotypes. By adding the element of calligraphy to the mixture of the hardness of metal and the softness of molten metal, I created a universal appearance that has a modern atmosphere that can be used globally, yet is Japanese and does not fix a sense of time.

The basic colors are cobalt blue and black. Cobalt blue is the blue of the ocean and sky surrounding the earth. The bright blue color produced by cobalt oxide and aluminum oxide becomes brighter as the aluminum content increases, so a brighter cobalt blue with more aluminum is used as the "Yamaichi Blue". The black color is a deep black that mixes all the colors visible from the texture of the metal that reflects the surrounding colors. The combination of a clean and sharp impression with a sense of brightness and youthfulness was chosen as the corporate color.

The symbol mark and logotype are symbolic of Yamaichi Metals' unparalleled value as a company with a strong, unshakable belief and a never-ending ambition.

Yamaichi Kinzoku's innovative know-how is not limited to the act of recycling, but also to the process of recycling, in consideration of the environment. Yamaichi Kinzoku is actively taking on the challenge of reducing the burden on the earth's finite resources and the environment, even if only a little, and is an opportunity for us to reconsider the way we live. This symbol mark and logotype not only embody Yamaichi Metals' aim to become a leading company in materials recycling, but also are designed to be familiar yet universal expressions that lead to the future, in the hope that they will be widely loved as symbols of resource recycling in society.

Artist. Innovating kimonos.
The solid representation utilising the minimal elements of circles and straight lines, components which construct the universe, depicts the infinite possibilities created from the finite.
Through her original brand “HIROCOLEDGE”, she aims to fuse art and fashion.

Born 1977.
2006 Founds TAKAHASHIHIROKO INC.
2008 Completes Tokyo University of the Arts for PhD.
2019 Selected as part of the permanent collection at the Victoria & Albert Museum in London.
2021 Appointed as a professor at Musashino Art University in Tokyo.